Our Drivetrain: Tank Drive
Our Achievements: Finalists at Oregon State Fairgrounds Event, Judges Award
The Game: Rapid React was a game where alliances had to score balls in an upper or lower hub to score points. Watch the game animation here. 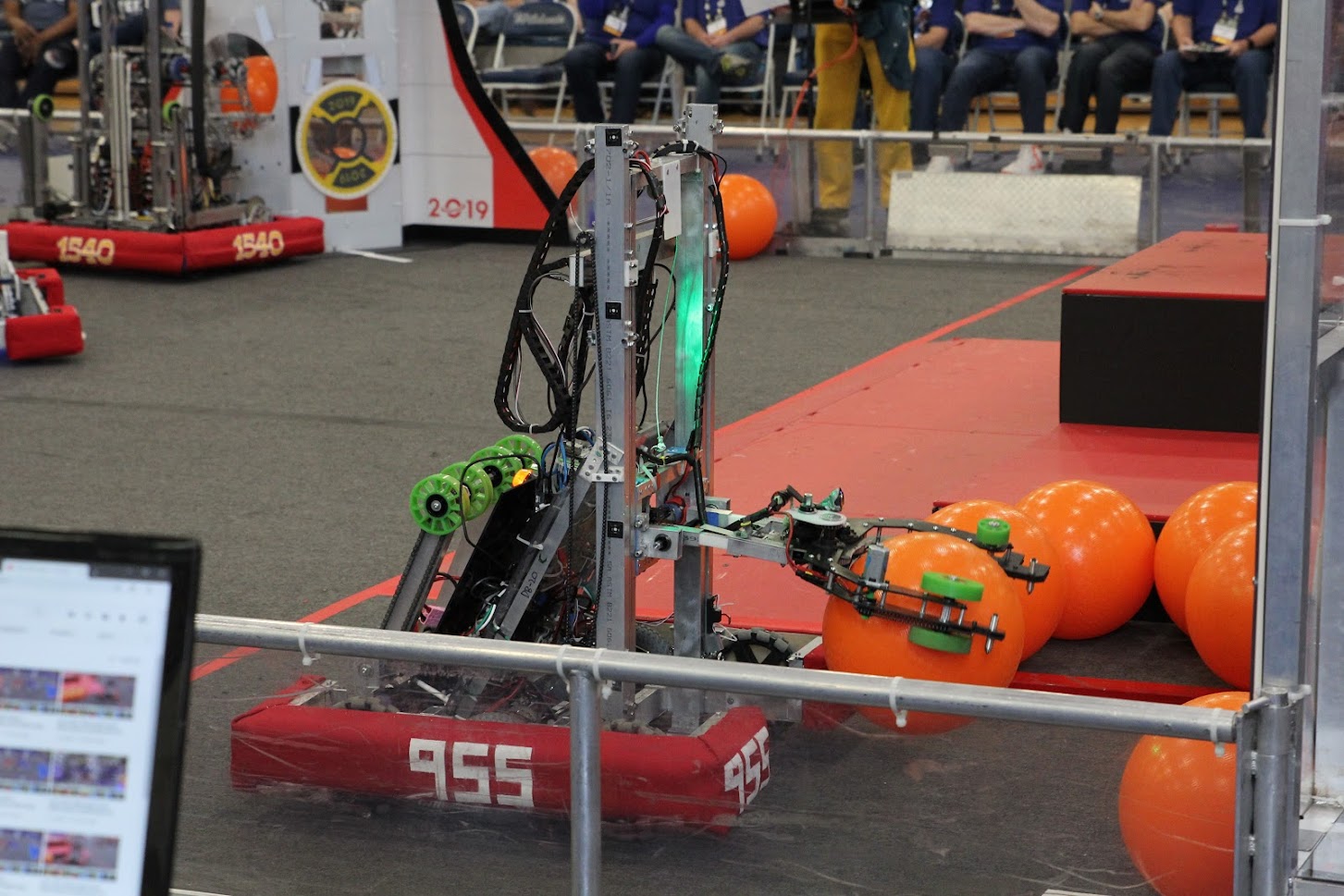 Our Drivetrain: Tank Drive
Our Achievements: Entrepreneurship Award
The Game:  Destination: Deep Space was a game that had alliances grab cargo and hatches to fill a rocket before liftoff. Teams also had to climb a 13″ tall step in the last 30 seconds of the game. 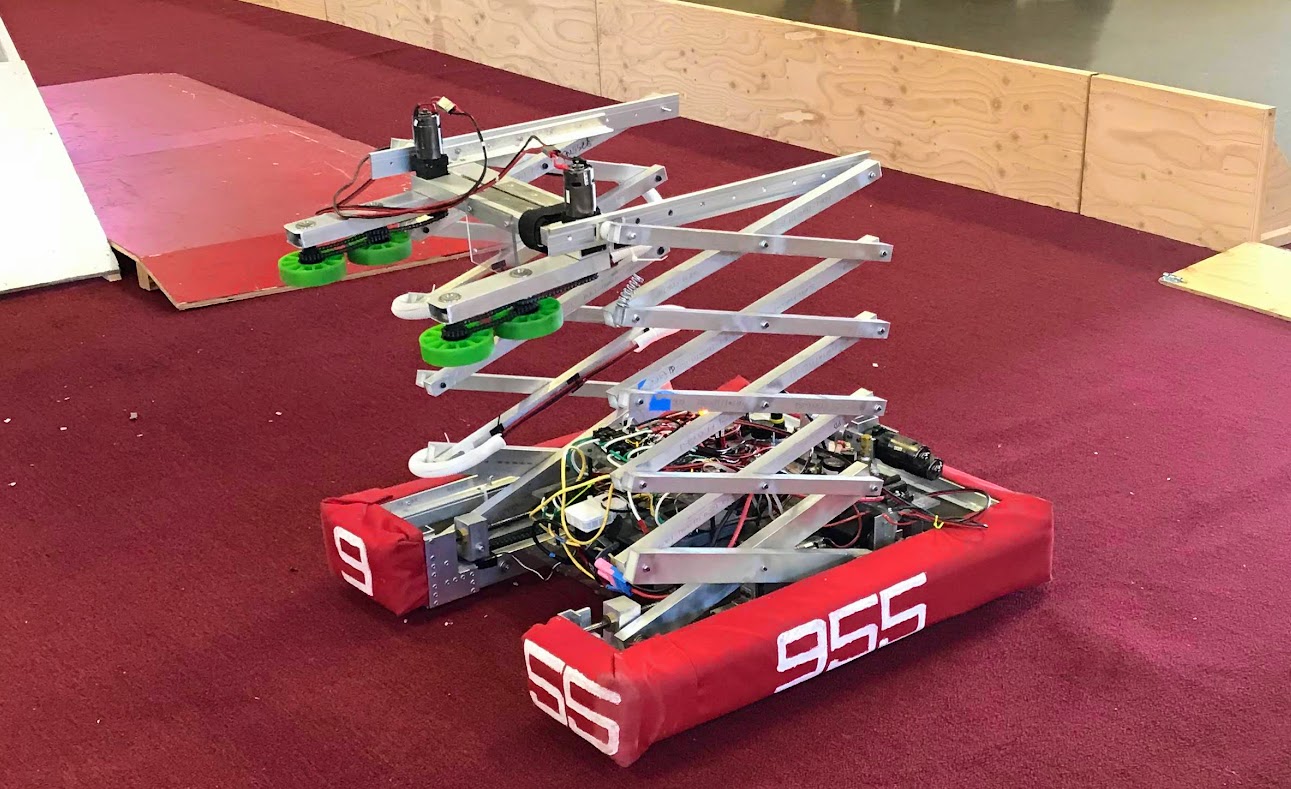 Our Drivetrain: Drop Center
Our Achievements: Entrepreneurship Award
The Game: Power Up was a retro-themed game that had alliances stack cubes onto scales to get points over time, as well as use the cubes to get special abilities. 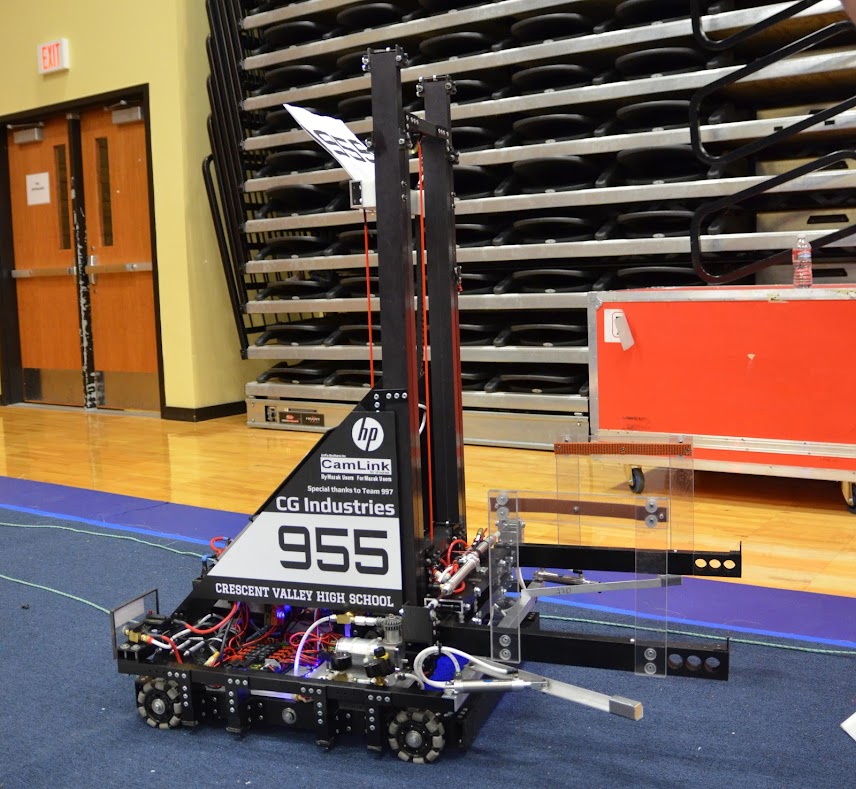 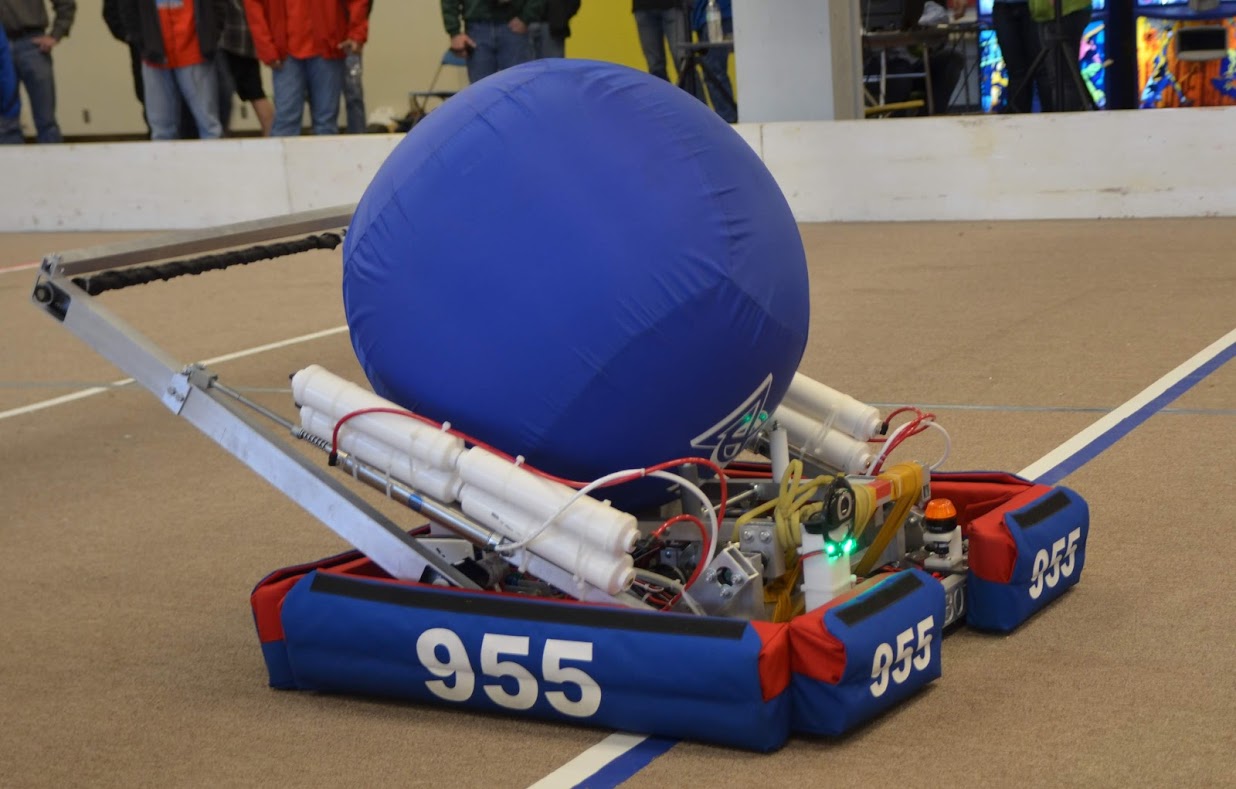 Our Drivetrain: West Coast Drive
Our Achievements: Entrepreneurship Award, Industrial Design Award, World Championships Qualification
The Game: in aerial assist robots have to grab large balls and hit them into a goal, if you pass the ball to your teammates before scoring, you get more points.

Our Drivetrain: Eight-wheel drive
The Game: 2012’s game was Rebound Rumble, where basketballs were shot at hoops of various values, and end-game points were gotten by balancing on bridges.

Our Drivetrain: Coaxial swerve drive.
Our Achievements: Entrepreneurship Award
The Game: Pieces of the first logo were made of inner tubes in the shape of the FRC logo. The robot needed to hang the tubes on racks to earn points the number of points is based on the height of the rack. In the finals of the match, the robots would deploy smaller bots to climb a tower.

Our Drivetrain: Direct-drive mechanism, with 6-inch wheels.
The Game: 2010’s game was called Breakaway, where robots get soccer balls into goals while traversing bumps in the field. They also can climb a tower and suspend themselves to gain extra points at the end of the match.

Our Drivetrain: CIM motor and 9:1 Bane Bot transmission on each wheel
The Game: Celebrating the 40th anniversary of the first manned mission to the moon, the robots had to place meteors, empty cells, and supercells in the opposing team’s trailer. The ground was made from a material called Glasliner FRP to mimic low gravity which would be felt when driving on the moon.

Our Drivetrain: 4 CIM Motor Bane Bots, 2 Speed Dog Clutch Transmission
The Game: First Overdrive was the 2008 competition where 2 3-robot teams went counter-clockwise on their own alliance’s track ring. They then manipulated “trick balls” to score points which consisted of under passing, overpassing, and similar styles of play.

Our Drivetrain: 4 CIM Motor Bane Bots
The Game: Rack n’ Roll was where two 3-robot teams played to put toroidal blow-up objects, each worth different points, in a specific order on a rack structure, named graciously as “The Rack”.

Our Drivetrain: Minibike motor direct drive
Our Achievements: Sacramento Regional Finalist, PNW Regional Finalist, Website Award
The Game: Aim High was a competition where robots were made to shoot balls into a high goal and two low goals, and also defend the goals. The team with the most points plays defense the next two turns.

Our Drivetrain: 2-speed shifting transmission with two CIMs per side
The Game: Triple Play was one of the first FIRST robotics competition to incorporate three robots on the field at once. The field was laid out like a tic-tac-toe board with nine large goals shaped like tetrahedra the game pieces were also tetrahedrons.

Our Drivetrain: 2-speed shifting transmission with Bosch drill motors
Our Achievements: Sacramento Regional Winner, Autodesk Visualization Award, World Championships Qualification
The Game: In the game Raising the Bar, teams built robots to give balls to their human players. the human players had to shoot the ball basketball style into stationary and mobile goals. The robot could hang on a bar at the end to gain extra points.

Our Drivetrain: Worm gear transmission
Our Achievements: PNW Regional Finalist, World Championships Qualification
The Game: In our 2003 game called Stack Attack, teams gained points by stacking bins in their team’s area. The team starts the round with 4 bins and 29 in the middle area.

Our Drivetrain: Drill motors, 2 Wheel Drive
Our Achievements: Motorola Quality Award, World Championships Qualification
The Game: This game was Zone Zeal, the competition had robots placing balls in movable goals that would then be carried to a specific, appropriate zone. Robots scored goals in the end zones at the end of the game and robots in their Alliance Zone at the end of a game would reward a team with points.